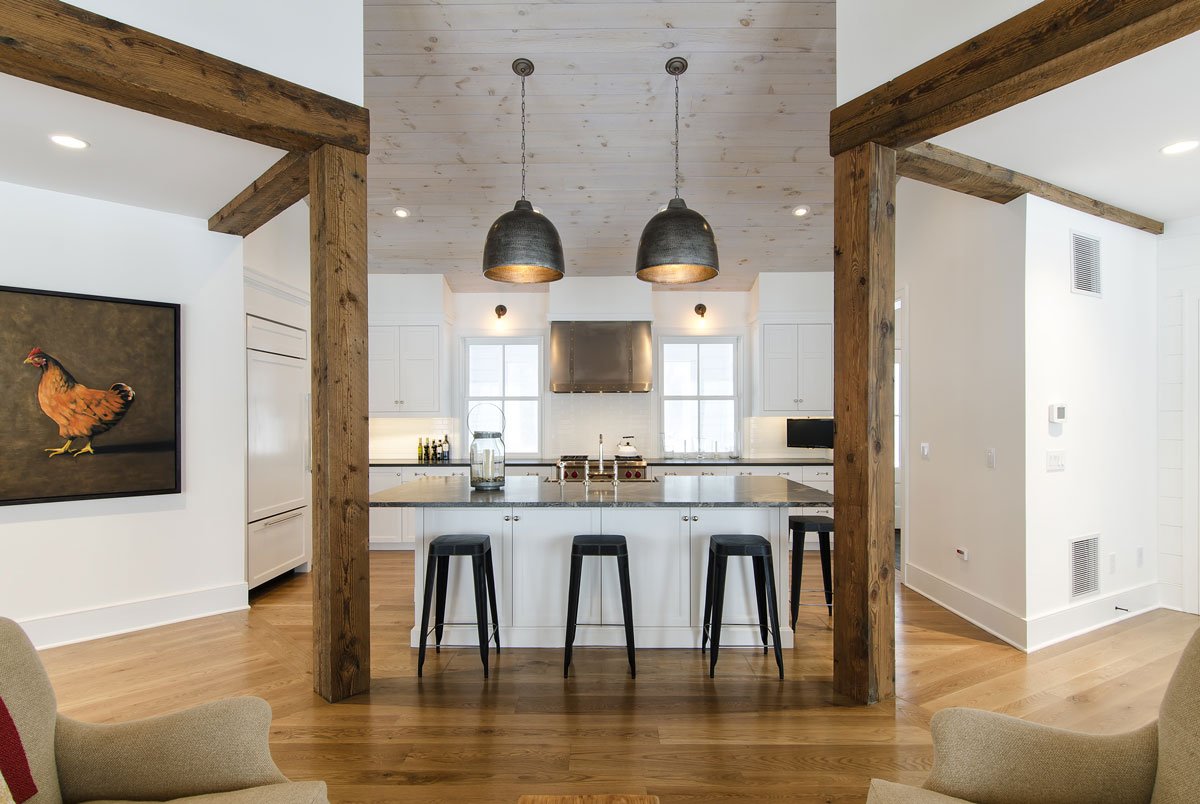 We’ve named this home Three Sisters. As you can see in the photographs below, instead of one monolithic mass structure, this home is divided into three separate buildings. Styled to resemble the region’s classic 19th-century colonial farmhouse, each structure is called a ‘sister’. Each is aligned on a different axis, with a distinct line of sight, to take advantage of the beautiful views in all four seasons.

This home sits on fourteen rolling acres in rural Litchfield County. It’s a unique, weekend retreat designed for a client who works in NYC, travels almost full time, and wanted a place to recharge her batteries. The property is deeded in such a way that the owner could only build on two of the fourteen acres. The rest is farmland and is still used to grow grasses for livestock feed. We’re also proud to share that this home won a HOBI Award for “Best Custom Home”

The home looks out on three meadows that are roughly separated by a fine, Aspen tree-line. In spring, summer and fall, you can only see trees, but in winter the views extend far beyond the Aspens into the meadowlands. In the distance, a historic, red barn claimed the heart of our client. She insisted that she be able to view the barn from all of her favorite rooms.

The first sister, on the left, is a standalone garage designed in a traditional barn style. It has a rolling barn door and plenty of room upstairs for storage or even a gym.

The second sister is the guest structure complete with its own mudroom, powder room, a private living room downstairs and bedroom upstairs.

The third sister is the main living quarters for the owners and contains all the traditional rooms as shown below.

In this close-up view of the outside, you can see the second sister on the left which includes the entry hall, while the third sister encloses the separated guest area. The two are linked together by a single-story kitchen pantry and a half-covered porch with bracketed trestles and a standing seam metal roof. While the garage has a more traditional farmhouse feel, the two living structures have a more modern, colonial-revival look often found in Maine or Litchfield. These styles are clearly identifiable when driving up to the house.

A closer view of the main entrance details the southern deck with overhang. It has spectacular views of the three grassy meadows separated by Aspen trees. The historic, red barn stands in the distance but is still hidden by leaves. The decking material on the porch is Alaskan White Cedar and split face granite stonework that climbs the chimney from floor through the roof. It’s the perfect place for a cup of tea on a cool autumn afternoon.

The study off the main living area is cornered with sliding, barn doors for privacy. If the owners need to take a phone call while they have guests over, this study is the place to go. The rolling doors close onto reclaimed antique posts and provide temporary privacy without having to leave the party completely.

Consequently, because this room has a full bath, it can also be used as a master bedroom. During the day the doors can be left open to incorporate the bedroom into the open space. At night, they can be rolled shut, converting into a cozy, private, sleeping area.

Generous entertaining areas abound in this home. This particular informal room has a floor-to-ceiling, split-face, stone fireplace, which adds stability to the airy, open-plan family room. The antique, reclaimed wood posts frame the open areas and define the rooms without blocking internal sightlines.

A secondary living space looks out into an Aspen grove through large-paned windows. This room, while enclosed and not part of the open floor plan, has so much light that it feels part of nature. This use of light and natural surroundings is part of our trademark and we are very proud of the way this architecture embodies that principle.

The simple, understated, lines of this home are easily enjoyed when viewed from the perspective of the stone fireplace, looking toward the modernist kitchen. The center island and the cooking area behind it become an integral part of the eye-catching angles. With a pantry off to the right, the art collecting home-owner decided upon a magnificent painting of a chicken to add to the 19th-century colonial farmhouse ambiance on the opposite wall.

The kitchen is as breathtaking as it is functional. The black-marble breakfast counter features an under-mounted farmhouse sink. A slanted, wood-planked ceiling adds a cozy dimension to the room, while limited overhead cabinetry allows for incredible views of the property — a special request from the client. Stark white farmhouse drawers and sleek wooden floors offer elegant contrast and add depth.

The separated master suite also takes full advantage of the views of the meadows. We brought in the same windows as the floor below and brought the ceilings down so as to evoke the feeling of an observation room. When in bed, it feels like the windows go all the way to the floor. It is not uncommon to see views of grazing deer and wild turkey, which helps turn this home into the perfect retreat.

This second-floor, master bath with a soaking tub provides a direct line of sight across the meadows and right up to the historic red barn. We used dark, regional, slate flooring and added windows over the tub and at eye-level in the well-appointed shower.

While it was originally designed as a weekend getaway, this 19th-century colonial farmhouse in the country is starting to feel more like a full-time home.

View the full Three Sisters photo gallery in the portfolio…